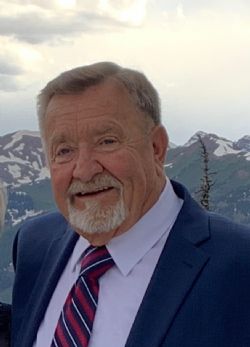 Larry Herbert Koglin, 81 of Buckeye, AZ, formerly of Scribner, NE, passed away September 25, 2021, at Abrazo West Campus Hospital due to complications from surgery.

Larry Herbert Koglin was born on January 25th, 1940, to Herbert and Martha Koglin in Scribner, Nebraska. He grew up in Scribner, graduated from Scribner High School in 1958, and attended Commercial Extension after high school. He joined the United States Marine Corps in 1959 and served four years. Larry married Lois Andersen on July 2, 1964. He was employed by AT&T and retired after 35 years. After retirement Larry enjoyed another 20 years of employment with various companies. His work ethic was impeccable.

Larry loved anything made by Ford, the Marine Corps, Western movies, Harley Davidson motorcycles, Nebraska Football, the Oakland Raiders and any sport his grandsons were involved with. He also had a passion for collecting- - -Ford cars and trucks, coins, toy cars and filling up photo albums. Larry enjoyed camping and boating, attending the yearly Sturgis motorcycle rally, traveling and most importantly spending time with his family and friends. He never met a person he couldn't strike up a conversation with. Those of you who knew him the longest definitely heard his ''stories'' and if he teased you….you should know you had a special place in his heart.

He was preceded in death by his parents Herbert and Martha Koglin, brothers Herbert Koglin and Marvin Koglin, and sister Alice Vetick.

A graveside service will be at Saturday, 2:00 pm, October 16, 2021 at the Scribner Cemetery. A celebration of life will follow the service at his great nephews ( Dale Christianson's) home, 19212 Military Road in Bennington Nebraska.