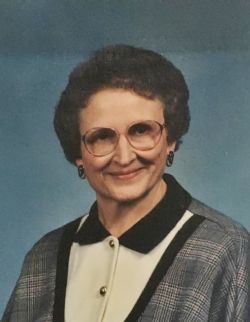 Janet was born January 13, 1935 to John and Helena (Heller) Goetze on a farm in rural Stanton County, Nebraska. She was baptized at St. Peter's Evangelical Lutheran Church in rural Howells, Nebraska, and later confirmed at St. Peter's Lutheran Church in Pilger, Nebraska. She attended District 32 of Stanton County until the family moved to Pilger, where she attended Pilger Elementary and High Schools.

On August 26, 1951, she was united in marriage to Charles Dalby at St. Peter's Church in Pilger, Nebraska. Their first year was spent traveling with Consumer's Public Power construction crew. They later moved to Scribner, where they lived for many years. Janet and Charles had three children together - Cathy Dorfmeyer, Joyce Stammer, and David Dalby.

Janet spent many of her years in the food service industry as a manager, cook, and baker. She worked in several different food establishments in Scribner and surrounding areas and was well-known for her wonderful food and baked goods. She made many a German chocolate cake and other goodies for folks in the Scribner, Nebraska, area!

She was a 4-H leader and Sunday/Bible school teacher when younger. She enjoyed traveling, fishing, growing vegetables and flowers, and making quilts. She provided her family with wonderful celebrations for all of the holidays, birthdays, and other special occasions. Her greatest pleasure has been watching her children, grandchildren and great-grandchildren grow and spending time with all of them. She has four grandchildren - Yvette Kampschneider, Jeremy Rasmussen, Nathan Stammer, and Jacob Rasmussen. She also has eleven great- grandchildren.

The funeral will be 11:00am, Wednesday, October 27, 2021 at United Lutheran Church in Scribner. Vicar Bob Ball will officiate. Burial will follow in the Pilger Cemetery. Visitation will be Tuesday, at Ludvigsen's Scribner Funeral Chapel from 3pm to 8pm with the family present from 6pm to 8pm.