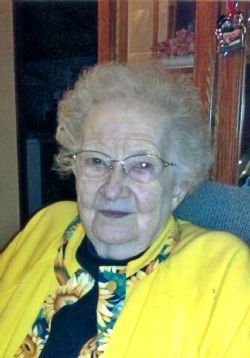 Adena Margaret Kleinschmidt entered life eternal on December 29, 2021. She is survived by her three daughters, three step children, cousins, nieces and nephews (who Adena loved as her own children), grandchildren and great-grandchildren.

Adena was born to Paul and Louise Walther on August 5, 1930, in Scribner, Nebraska. She was raised in a loving, Christian home by her caring mom and dad, who was a mail carrier and who started his career on a horse-drawn buggy. Adena was the youngest of six children, Don Walther, Ray Walther, twins Ann Walther Wittmann and Paula Walther Force, and Wilma Walther Echtenkamp. She had a beautiful singing voice, often asked to sing at her friends' weddings.

In 1952, Adena married her first husband, Dale Sandin, to whom she was married for 26 years. As an Air Force wife, Adena lived in Germany, Virginia, North Dakota and Nebraska. After settling in Papillon, she worked for the school district for many years. Dale and Adena had three daughters, Cyndi Green, Patti Warren and Sandra Sandin.

In her later years, Adena loved to write letters, spend time with her grandchildren and great grandchildren, and to visit with friends and family that stopped by or called.

Adena will be missed by everyone who was touched by her life.

Funeral services will be held at 2 p.m. on Monday, January 3, 2022 at Ludvigsen Mortuary, in Fremont, Nebraska. Service will also be viewable on Ludvigsen Mortuary website. Burial will follow in the Scribner Cemetery. Memorials may be directed to Christ Our Savior Lutheran Church in Fremont.