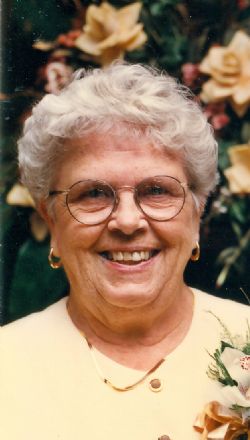 Valetta A. Klahn, 94, of Scribner passed away on Wednesday, January 5, 2022, at the Hooper Care Center in Hooper, Nebraska.

Valetta was born January 30, 1927, in Scribner to Emil and Edna (Thernes) Kienbaum. She lived in the Scribner area all her life, graduating from Scribner High School. On September 15, 1946, she married Marvin Klahn at the United Lutheran Church in Scribner. They moved from the farm into Scribner in 1994 where they became instrumental in the continued development of the Scribner Park.

Valetta was a homemaker, raising four girls on the farm. Summer days were spent gardening and canning. She also took pride in her beautiful rose garden. Later, she began a fulfilling career as social worker at the Good Samaritan Center in Scribner. Valetta was an avid fan of Husker football, the Kansas City Royals, and the Scribner Hogs. She loved sports, especially when she could root for her two grandsons, two granddaughters and great-grandson.

A Memorial Service will be held at 10:00am, on January 29 at the United Lutheran Church in Scribner. A Celebration of Life will follow at Mel's Bar. There is no visitation as Valetta wished to be cremated.

Memorials are suggested to family for later designation.

Ludvigsen's Scribner Funeral Chapel is in charge of arrangements.