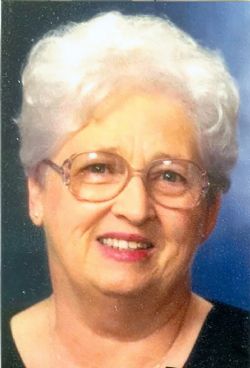 Lila was born December 18, 1931, in West Point, Nebraska, to Alvin and Irene (Swearingen) Lahmann. She lived most of her life in Nebraska. She graduated from Scribner High School in 1949. She worked at several jobs in Fremont. Lila married Dale W. Heitshusen on August 25, 1951. The couple lived in San Antonio, Texas for a short time while Dale was serving in the US Air Force. They were married for 70 years. To this union there were born three children, Gary Dale, Kay Diane and Galen Dean, all bringing joy to the family.

Lila and Dale lived on the Heitshusen farmstead for over 50 years. The couple received a Pioneer Farm Family award from Ak-Sar-Ben. She helped on the farm, as well as, taking care of the home, the chickens, many cats and dogs. She was an awesome cook and her family reaped the rewards. She worked outside the home over the years and some of the jobs were selling Avon, Aloe Vera and Thomas Kinkade in the Omaha gallery.

Lila enjoyed quilting and made each of her grandchildren a quilt for their high school graduation. She also liked reading, tending to her flowers, gardening, family activities and traveling.

She was preceded in death by her parents, Alvin and Irene Lahmann.

The funeral service will be held at 10 a.m. Monday, March 28, 2022 at the Uehling Auditorium in Uehling. Visitation will be Sunday, March 27 from 4 p.m. to 8 p.m., at St. Paul's Lutheran Church in Uehling. Family will be present from 4-6 p.m. Burial will be in Memorial Cemetery.

Memorials can be directed to the Uehling's Fire and Rescue, Uehling Auditorium or donors choice.

Online condolences may be left at: www.Ludvigsenmortuary.com.