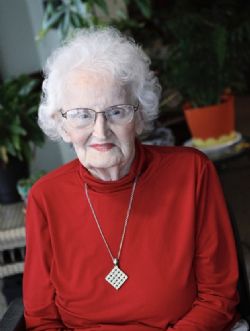 Anita Shadbolt, age 88, of Omaha, went home to be with her Lord on Wednesday, September 8, 2021, at Brookestone Meadows Rehabilitation and Care Center, with her family by her side.

Anita was born November 17, 1932, in Mannville, Alberta, Canada to Henry and Olga (Kulak) Hennig. The Hennig family lived in several towns in Alberta and British Columbia, Canada, and also lived in Bonner's Ferry, Idaho. In 1947 the family moved to Pender, Nebraska, where Anita graduated from high school. It was here that she met Ervin "Bus" Shadbolt, and Anita and Bus were united in marriage on September 21, 1951. They were married for 64 wonderful years. Anita and Bus were blessed with three children: Michael, David, and Jane.

Anita and Bus lived with her father in Pender for a time following their marriage, and in 1957 moved to Fremont where they lived for 31 years. After Bus's retirement, they moved to Wahoo where the couple managed an apartment complex for two years. They then moved to Omaha to manage a condominium complex, and then spent a year in Battlement Mesa, Colorado, before returning to Nebraska.

Anita loved to cook, and took great pleasure in preparing meals for her family and friends. Her potato salad was legendary. She loved holidays, and especially looked forward to Christmas with her children, grandchildren, and great-grandchildren - one year she even arranged for Santa to personally deliver a pair of cowboy boots to Bus on Christmas Eve.

Her last years in Omaha were spent at Heritage at Legacy and then at Brookestone Meadows. Her quick wit and ready smile made her many friends - both among the residents and the staff - at both facilities.

Anita was confirmed in the Missouri Synod Lutheran Church in Bonner's Ferry by her father. Her strong Christian faith was evident throughout her life, and she lived her life in the assurance of God's love and the promise in Jesus of eternal life. She was a long-time member of Trinity Lutheran Church in Fremont, Nebraska.

Anita is survived by her children, Michael (Patti) Shadbolt of Omaha, David Shadbolt of Omaha, and Jane (Albert) Winseman of Omaha; four granddaughters - Sara (Chip) Needham of Bellevue, Bethany (Ryan) Olson of Fremont, Julie (Kevin) Wagner of Omaha, and Kaleigh Winseman of Omaha; eight great-grandchildren, and brothers Ron Hennig of Omaha and Melvin (RaeJean) Hennig of Coeur d'Alene, Idaho. She was preceded in death by her parents, her husband Ervin Shadbolt, and a daughter-in-law Kathleen Shadbolt.

Visitation will be Monday, September 13, 2021 at the Ludvigsen Mortuary Chapel from 3pm to 8pm with the family present from 6pm to 8pm. The funeral will be 10:30am, Tuesday, at Trinity Lutheran Church in Fremont with the Rev. Anthony Gerber officiating. The committal will be at St. John's Lutheran Cemetery near Pender. Memorials may be directed to Trinity Lutheran School, Fremont, Nebraska.

To watch the video the family made please use the following link:

To watch a video of the service please us the following link: