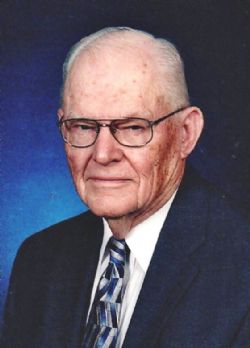 Edgar William Meyers, of Fremont,
passed away at Linden Court in North Platte on October 26, 2021, at the age of 106.

Edgar was born to Fred and Emilie (Miltz) Meyers on November 24, 1914, in Alliance where the family lived. After the death of his father in1922, Edgar moved with his mother and sister to Grand Island. He graduated from Grand Island High School then attended Kearney State Teachers College, majoring in chemistry. Edgar then worked in Denver, CO, and Ogden, UT.

While in Denver Edgar was invited to work on a secret radar project but was unable to do so because he couldn't get an Army deferment. A short time later he enlisted in the U.S. Navy and proudly served from 1942 to 1945. Edgar was given the rank of Radio Specialist since he was a licensed Ham Radio Operator and went on to teach others how to build and maintain communications for the Navy. He always said, "Back in those
days you could not order radio parts, you had to repair or make your own."

On September 5, 1942, Edgar married Lula Beckmann in Grand Island. They lived in various places as his duty stations changed then returned to Grand Island following his discharge.

Edgar was employed by Nebraska Consolidated Mills, which eventually became ConAgra. He was transferred from Grand Island to Omaha then Fremont in 1957 and retired after 33 years with the company. He was a
member of the American Association of Cereal Chemists and held various offices within the Nebraska section of the AACC.

All his life, Edgar loved to fix things and was creative in finding new ways to use what he had on hand. He was devoted to his wife and family and was a man of God. Edgar had great faith and studied the Bible. He was a devout member of Trinity Lutheran Church where he was active with the Men's Bible Breakfast Group and served on different boards and committees.

He was preceded in death by his beloved wife of 75 years, Lula; his parents, Fred and Emilie; and sister, Alyce Simon.

The funeral will be 11am, Friday, November 5, 2021 at Trinity Lutheran Church in Fremont. Burial will be in Memorial Cemetery.

In lieu of flowers, memorials may be made to the Trinity Lutheran Church, Lutheran Hour Ministries or the Orphan Grain Train.