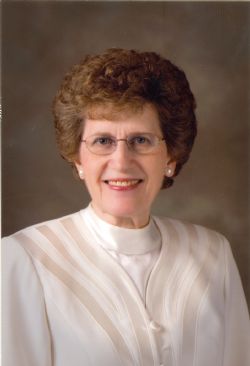 She was born May 4, 1935 to John and Elizabeth (Hagedorn) Luebbert, the youngest of 7 children, on a farm near West Point, NE. She received her education at St. Anthony's Grade School and Guardian Angels High School in West Point.

Before her marriage, she worked as a bookkeeper at First National Bank & Trust in Fremont, NE. On May 16, 1956, Elsie married the love of her life, Marvin Popken, of Hooper, NE. After his military service, they lived in Fremont. They purchased and moved to a farm south of Fremont in 1964. There, they raised their five children.

Elsie was active as a 4-H leader and very involved in Christian women's ministry. She hosted and attended many Bible Studies in the Fremont area, and spent time writing her memoir. She worked as a secretary for Lawngevity Lawn Care for 13 years prior to retirement. Her hobbies were sewing, reading, traveling with Marvin and enjoying her grandchildren.

She was predeceased by her husband, Marvin, who passed away in October, 2013.

Following Marv's death, she began writing a book, See What the Lord has Done. It details her life and relationship with Jesus Christ, and was published in 2018. When she accepted Christ as her Lord and Savior, she was never the same, and loved to tell others the good news of knowing Jesus Christ. Her faith in Jesus was her most prized possession, followed by her husband and family.

Elsie never met a stranger and her love for and belief in others was demonstrated by her desire to serve. Everyone who knew her said that kindness was her trademark. She had the gift of making others feel as if they were the most important people in the world, because to her they were.

Memorial gifts may be donated to Project Rescue, and earmarked for The Oasis Bangladesh. https://projectrescue.com/

The funeral will be 10am, Saturday, December 18, 2021 at Living Word Church in Fremont. Burial will be in Pohocco Cemetery south of Fremont. Visitation will be Friday, 3pm to 8pm with the family present from 6-8pm at the Ludvigsen Mortuary Chapel in Fremont.