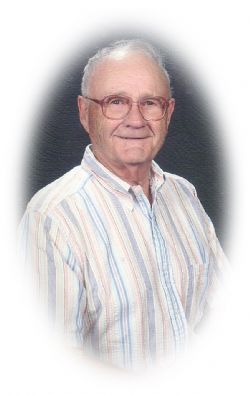 He worked on the family farm and graduated from Scribner Public Schools May 1944. He played basketball and was given the nickname ''Buckets''. He also played French horn with the Scribner HS band.

Since he did not arrive in Italy until the end of combat, he had fond memories of his time serving as a medic. He said that his main job was giving injections to GIs for treatment of venereal diseases.

While away in the army, he was incredibly home sick for his family and for Scribner. After his discharge he hitchhiked from Fremont to the family farm. He worked on the farm, soon realizing that he was not cut out to be a farmer. Thus began the journey of Scribner's Native son Lee Burkink, Jr. and Lee's Market.

Lee and Catherine (Teena) Toelle were married on February 19, 1950. Their family grew to 1 daughter and 4 sons. Everyone in the family- children, wife, and Lee's mother Odetta worked at Lee's Market. To this day Lee's sister JoAnne Dahl and two sons- Jeff (JB) and Pat-are involved with Lee's Market. Pat owns a grocery store in Madison and son, Mike, owned grocery stores for many years. The first Lee's Market was purchased from Earnest Griener in 1955. From 1964-1985 Lee's Market was in the current Z's Bar and Grill building. Re-locating to the present building in 1985. All five of his children have relatively fond memories of working at the store. He taught them, by his example, the importance of hard work, following through on commitments and treating everyone with respect.

Lee's commitment to community and his family is exemplified by the long list of organizations and activities in which he was involved over the years. He was a Chamber of Commerce member. He served on the Scribner School Board of Education during the building of the elementary school, giving him the opportunity of handing his eldest child her high school diploma. He was on the Scribner City Council when the city purchased the electrical and gas systems and built the somewhat controversial dike surrounding the town. He believed it saved the town from devastating flooding of 2020. He has been a member of the American Legion and West Point's VFW post for many years. He was a member of the Scribner Volunteer Fire and Rescue Squad. He resigned from the Rescue Squad when his own children started driving. He has been a member of the United Church of Christ, for a time singing with the choir. When his sons played football, he was in the Press Box as a spotter for home games. He was a Big Red fan and held season tickets for over 50 years. For the past few years, he no longer attended home games, but was happy to share tickets with his children and grandchildren and watch games on TV. In 1994 the Chamber honored Lee with the Native Son award, which had previously been awarded to Scribner natives who found success after moving away.

Everyone who knew Lee realized how much he loved golf. He was a founding member of Indian Trails Country Club. He was never happier or more content than when he was on the golf course. For many years it was where he could be found Tuesday afternoons and early Sunday mornings. He had many golfing buddies through the years. He and his lifelong friend, Ralph Wagner, enjoyed nothing more than a round of golf followed by a couple of beverages and a nice meal, discussing their good and the not so good golf shots. They continued to share these times through August of this year. Lee's final golf outing was in October when he encouraged, two of his sons- Tim and Pat, daughter-in-law Stacey and son-in-law Len O'Neill to keep their heads down, swing easy and follow through. He had every intention of being back on the course next spring.

Visitation will be Monday, December 27, 2021 at Ludvigsen's Scribner Funeral Chapel from 3pm to 8pm with the family present from 5pm to 8pm. The funeral will be 10:30am, Tuesday, December 28, at the Scribner United Church of Christ. Burial with Military Honors and Fireman's Last Call will follow in the Scribner Cemetery. Masks are encouraged at both visitation and funeral.

The service will be recorded and uploaded to YouTube following the service. The link will be at the bottom of the obituary on this page when available.