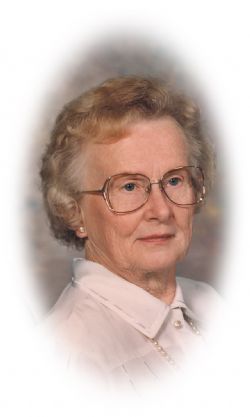 Maxine was born January 29, 1924 on the family farm near Uehling, Nebraska to Walter and Bertha (Schroeder) Von Essen. She attended Von Essen School and graduated from Oakland High School. She then attended Midland Lutheran College. On October 23, 1944, she married Duane Pfeiffer at St. Paul's Lutheran Church north of Hooper. They farmed her grandfather's farm near Oakland and later farmed her parents' farm also near Oakland. In 1972, they moved to a farm west of Morse Bluff. Together, they were part of a card club for many years in the Scribner area. She always enjoyed cooking, gardening, reading, doing puzzles, and playing games. She loved to travel to visit family and see the country.

The funeral will be 2pm, Friday, July 29, 2022 at St. Paul's Lutheran Church north of Hooper. Burial will follow in the St. Paul's Cemetery. Visitation will be Thursday, July 28, from 3pm to 8pm with the family present from 6pm to 8pm at the Ludvigsen Mortuary Chapel in Fremont. Memorials are suggested to the church.