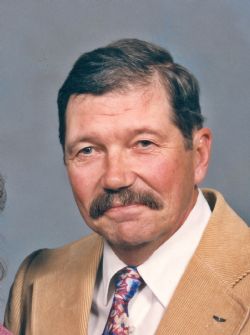 Larry was born February 1, 1936 in Lyons, Nebraska to Phillip and Janette 'Wolten' Going. He was raised in Hooper and graduated from Hooper High School. He served in the United States Air Force from 1954 to 1957. After his service he married Evelyn Behle and they later divorced. Larry then married Marilyn Lierman on December 4, 1976 in Hawaii.

Larry worked for Hormel Foods for 39 ½ years. He had served as Mayor of Nickerson and also served on the Nickerson Volunteer Fire Department. He was a member of Trinity Lutheran Church in Fremont and the Hooper American Legion Post 18.

Larry was preceded in death by his parents.

The funeral will be 10am, Tuesday, September 6, 2022 at Trinity Lutheran Church in Fremont. Vicar Greg Rathke will officiate. Military Honors will be rendered at the church. Burial will be in the Lyons Cemetery. Memorials are suggested to Trinity Lutheran Church. Visitation will be Monday, with the family present from 2pm to 5pm at the Ludvigsen Mortuary Chapel in Fremont.